The Mother and Lady of all peoples of Amsterdam

The prayer of the Mother and Lady of all peoples, part of a global action. This action is to recite the daily prayer and disseminating it to Amsterdam. Madonna promises a new Pentecost in the world! Of course not forgetting the prayer of the rosary, prayer favorite Maria Ss

The prayer of the Lady of All Peoples (Amsterdam)

On 11 February 1951, the anniversary of the first apparition at Lourdes, Maria said the prayer to which he had alluded in the first message of 1945, saying: "Prayer must be made!" In this simple and brief prayer asking the Lord Jesus Christ's coming of the Holy Spirit. To all those who recite the Lady of All Peoples Advocate and promises the coming of the Holy Spirit. He says: "This prayer is for the salvation of the world. This prayer is for the conversion of the world. Pray this prayer in all circumstances! Spread in churches and through modern means. The men of this world must learn to rely on the Lady of All Peoples, who once was Mary, who advocate that the world is free from corruption, disaster and war "(38th message). And again it makes a great promise: "Through this prayer the Lady will save the world" (46th message).

The image of the Lady of All Peoples 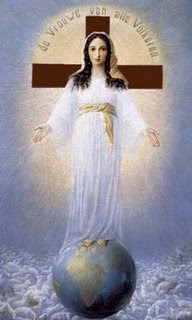 Already at the second message, the Lady appears to the seer in a sea of flowers, before whom kneeling are thousands of people. After saying the prayer, attracts the attention of visionary sull'aspettoesteriore of his person and asked that it depicted in a painting. It appears standing on Earth, because - he explains - is coming for the whole world. His face, his hands and his feet are like those of a human being, while the body is spiritualized. Located at the cross, to indicate the intimate and painful union that joins the Son in the sacrifice of the cross. Her hands give off three rays, rays of grace, redemption and peace, which can give as Lady of All Peoples. The rays fall upon the peoples of the earth, represented by the sheep, which do not find peace until you turn to the cross. For this representation makes a promise: "I promise to all those who pray before this image and call the Lady of all peoples to give thanks for the soul and body, to the extent that the Son will! Have to consider not only what your circle. I am the "Lady of all Peoples." This picture must go from country to country, from city to city. This is the purpose of the work of redemption "(33 ° message).

Followed by a brief summary of the data messages from Mary to the visionary Ida Peerdeman:

1) The death of Pope Pius XII°

God provides the best evidence of the authenticity of the messages with the prediction of days in which Pope Pius XII will be called to eternity. Only God, "Lord of life and death", can know this date. Proof of authenticity, which extend to the life of a holy Pope, not a clear confirmation of the message for the Church Universal? During the night between 18 and 19 February 1958 (Ash Wednesday) Ida receives the message that, more than any other, will become proof of authenticity for Amsterdam. Here is his testimony: "Tonight I woke up with a jolt because I was calling. The three were accurate. I saw again the light and I heard the voice of Mrs. I said, 'Here I am again. Peace of the Lord Jesus Christ be with you. (...) Did I make a statement, which does not say anything to anyone, not even the sacristan and your spiritual director. When it is done, you tell them that the Lady you had predicted. Here is the communication: Listen, the current Holy Father, Pope Pius XII, will be welcomed in our this year, in early October. The Lady of All Peoples, the Co, Mediatrix and Advocate, will lead him to eternal joy '. This message frightened me and struggling to believe it. The Lady said: 'Not afraid, daughter! His successor will proclaim the dogma '. Ringraziai the Lady and she said very solemnly: 'AMEN'. "The same morning of Ash Wednesday, the visionary call to his spiritual director and informed him that the Lady gave a message that can not talk to anyone. But Father Frehe has the good idea to ask Ida to put everything on paper: "Promise to write soon and bring today personally, otherwise it has value. Think about that. You can seal the letter, just to receive today, as soon as possible. "Obeys Ida writes typewritten words of Lady, a copy kept at home, it will put the original in a sealed envelope and delivered the same day at spiritual director. These places the envelope in a drawer of his desk, where it is soon forgotten. The seer spends several months of quiet and confident expectation of the materialisation of the Madonna said. In retrospect, in his letter of 24 November 1958, describing this painful period in his bishop, Mgr. Huibers, "I continued to think about what the Lady had told me to report to the Holy Father. The worst was in the days when the Holy Father was at death's door. Acquaintances and often phoned me told me to console me: 'But the Holy Father did not die, you can not' and so on. These moments, Bishop, were the hardest ... On the morning of October 9, I was sitting in front of the radio and the news of the death of the Holy Father esclamai: 'Thank God!' I know that this was not nice of me, but I forgive him, because he knows that I said to Mrs. that there would be abandoned and compromise its cause ... "Ida went immediately from his spiritual director and asked him to consult the contents of the sealed envelope. Since Father Frehe not remember it, showing where the houses and return the copy of the message of Ash Wednesday, written following his wishes. Great is the wonder of Father Frehe, so that it shall immediately send to Rome the original still sealed, to the attention of competent persons as convincing proof of the authenticity of messages.

2) The Communist revolution in China

On 7 October 1945 Ida has a short but clear vision of China: "I see China with a red flag!" The vision takes place four years later. After two years of civil war between the Communists el'armata General Tschiang Kai-scheks on 1 October 1949 the winner Mao Tse-tung, head of the Communist Party proclaimed the People's Republic of China.

3) The landing on the moon

When Ida in 1946 saw the landing on the moon, without grasping the meaning of the scene, and try the absence of gravity, can not imagine the event which will assist 23 years after watching a television broadcast, the first moon landing, which took place on 20:07 .1969. In this regard, in 1967 he reported: "Then it was as if I was with the Lady at the top of the globe. I can not say otherwise. She made me attentive to something and I saw distinctly the moon in front of me. Then something came flying, and came on this moon. To this I said: 'There is something that arrives on the moon'. I did not know how I could explain it in another way. I was on the globe, but is not that there really was, it was as if I hover in the air. Then felt a strange sensation. I have many difficulties to explain this kind of thing. It was a kind of natural phenomenon. What we saw was but a kind of air space had to be something similar. "Later he wrote:" How impressive was the moon landing, right? Just like the Lady I had left to see February 7 1946. Sin, then I did not know what it was and what it meant. For this I have reported only the words that I left the Lady say, 'Is there anything that reaches the moon.' Then I saw something coming down fast enough on the moon, a white, nearly square. An impressive performance. "

4) The fall of the Berlin Wall

In 1950 Ida saw the reunification of Germany. "Then the Lady is a thick line in Germany and said: 'Europe is divided into two'." Following the visionary must make a gesture and say, "Grab this line and I hide." (10.12.1950) 40 years later, in 1989, witnessing the fall of the Berlin Wall. Three weeks before the president of East Germany Honecker, self-confident, he said: "The wall still exists between a century."

5) Europe and U.S. united in danger of chemical and bacteriological weapons?

The following paragraph from the message of Amsterdam, 26 December 1947 is the growing danger for America and Europe of a terrorist attack with chemical or biological weapons. The visionary Ida Peerdeman says: "... I see America and Europe, next to each other. Then I wrote: 'War economic boycott, currency crises, disasters'. Later I see before me pictures of people. I see faces, big faces, covered with terrible sores, seems a kind of leprosy. Then I suffered terrible life-threatening diseases: cholera, leprosy, all that these men must endure. Then again is fine, and I see around me hover small objects blacks. I try to understand what they are, but I can not. I think that is a very delicate fabric. I can not distinguish what is his eyes. You should look as if through some things. I see hours of the magnificent white visual fields and on these small items I see blacks, but then zoomed and it seems to me that they are living. I am not able to describe it well. I ask the Lady: 'I am bacilli?' She answered with a very serious expression: 'It's hell'. Then I feel my face and my whole body swell. I have the impression of having a very large face, and everything is stiff and swollen. I can not move. Mrs. Odo say 'It is to invent it', then quietly: 'The Russian, but also others'. Then the Lady says, 'People are warned!'. "This message, as early as 1947, is more topical than ever.

The victory of the cross

Then I see a lot of strange images. Beneath the cross of swastikas, and I see fall. Then I see the stars, they rushed, sickles and hammers, everything falls under the cross. I see red, red does not disappear entirely. The Lady says: "Everyone raise your gaze. Now they want it, but at the cost of ... It was dark on earth, but now everything was enlightened. Now see that everything is fleeting, that nothing lasts. "

It seems to me that the hand is made lighter. All of a sudden I see the Lady of with the new rosary. He says: "Continue to pray, the whole world!" Shows the cross and says: "The whole world will return from largest to smallest, from the the poor richer, but this effort will cost. "

To obtain the images with the prayer of the Lady of all peoples, contact:

Back to the Blog 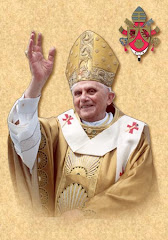